It’s easy to beat up on a film like Point Break–it’s not really convincingly made, it’s cheesy in a lot of places and outright stupid in all the others. All that, and it stars Keanu Reeves–a man whose name is Hawaiian for “cool mountain breeze,” which sometimes seems to be precisely what blows between his ears. The film also features Patrick Swayze, Lori Petty, that guy who can’t cover his teeth with his lips, and a butt with entirely too much screen time. 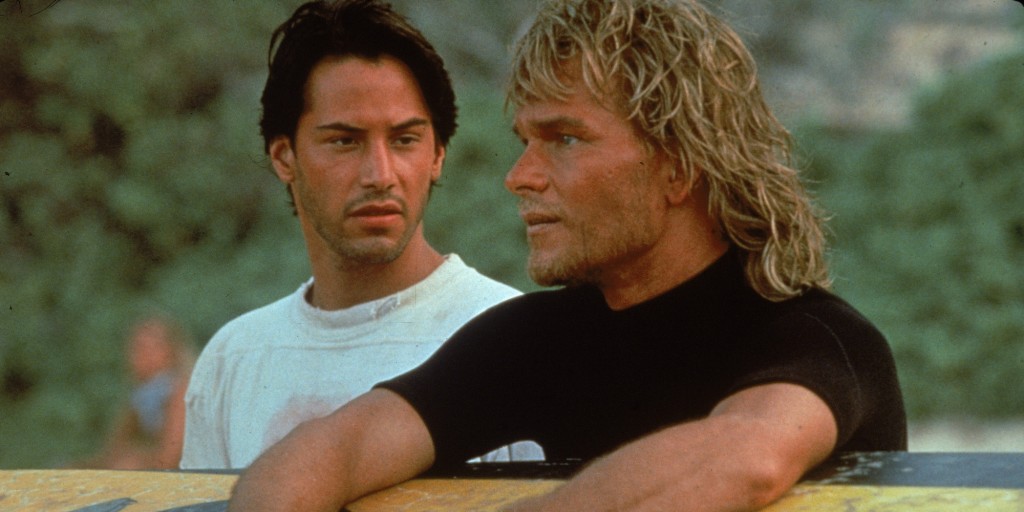 Point Break has something to do with an FBI agent going undercover in a gang of surfers who have been implicated in a string of bank robberies. The robberies are perpetrated by “the Ex-Presidents,” men in rubber masks resembling Reagan, Nixon, LBJ, and Billy Carter’s brother. The FBI agent in question is rookie (or just naive) agent Keanu “do you want to hang off my rock” Reeves, ably assisted by Gary Busey in the Obligatory Crass Grizzled Cop role. As if the obvious cliche is not enough, Busey constantly froths bad similes like, “[then] disappear like a virgin at prom night.” Just so you remember that he’s crass and grizzled.

At some point the surfing gang evolves into a skydiving gang, apparently pointing the way toward the next step of human evolution. The surfers apparently make their jump from a high enough altitude to freefall uninterrupted for some five to ten minutes, placing them somewhere in the neighborhood of the moon upon their initial jump. Of course, these sequences open the way for the climactic struggle, which was, shall we say, “inspired” by a similar sequence in Moonraker.

There is also a freakish naked meth-head knifefighting sequence, an androgynous love interest–androgynously named Tyler, no less–and very bad day-for-night photography. And Australia, it turns out, bears a striking resemblance to coastal Washington.

So, in order to end this on a positive note, I want to point out the one decent thing you can take away from Point Break–it offers an infinitely better version of Jimmy Carter than real life. The real Jimmy Carter is now a wrinkly peacenik, like Gandhi crossed with a sharpei. Point Break offers us a Jimmy with just as rubbery a face, but now in full shotgun-wielding, bank-jacking mode. And, after recovering from the initial experience of watching the movie, I also realized that this film works pretty well as a fantasy of what the Cold War might have been like had it not been, well, cold. And guess what–just like we always knew, Ronald Reagan kicks butt.