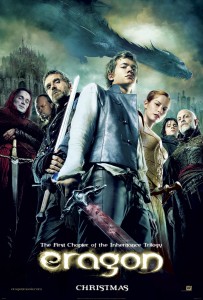 It’s a well known law of the universe that a movie will be at least three degrees of awesomeness below its book origins. Few movies escape this law.

A slightly less well known rule mandates that two awesome source materials when mated in the mind of the less than adept will give birth to an inbred retard. So, with these two rules firmly in our minds we can understand why Eragon is a Now Famous Lousy Movie Night gem. I won’t list why Eragon works so well as a NFLMN movie. That would take far too long and, like most genius flicks, it’s better experienced than explained. Suffice it to say about the only thing Eragon gets right is teen angst. But this isn’t a compliment nor very amazing since the author was, in fact, a 15 year old.

One would hope that a book of questionable worth would be redeemed in the hands of a competent, insightful director and that hope wouldn’t seem misplaced. But it appears no expense was spared to find a director as ‘qualified’ as the author. His skill can be summed up in this quote from the movie’s director commentary: “The sequence was very, um….sequential.” A critic, after watching Eragon observed, “The book was written by a 15 year old and the movie directed by a 12 year old.” If only the director had been 12 he might be viewed more kindly.

But not all was lost in the making of Eragon. No, in fact the movie is so perfectly bad that it stands atop the putrid heights of NFLMN season 1 cinema rottenness, having claimed the ‘lousiest picture award’, and has become a beacon of hope to all who would entertain the critics of NFLMN. On its blistered brow reek the pustules of ‘rapid-growth flight sequence’, ‘giant blue pill’, ‘misguided teen angst’, and ‘Jeremy Irons, why are you doing this to your career’. NFLMN exists for movies such as this and Eragon’s sequel cannot be made too quickly.

Oh, and in case you were wondering, ‘Eragon’ is ‘Dragon’ just frakked up.