Every season or so a “movie” comes along that is so bad that it will literally burn a whole on your retina and leave you scared for life. These more-awefull-than-normal “movies” are lumped under one mega lousy “movie’s” shadow. That “movie” is Hard Cash. 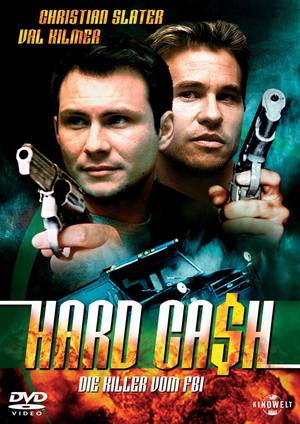 Now, pretty much everyone here at L”M”N have heard me udder the words “this is the worst “movie” I have EVER seen.” This usually happens on a weekly basis. But, when I do, I am instantly reminded (with a stinging sensation in my eyes and in my heart) of that first “worst “movie” i’ve ever seen.” I am reminded of the multiple death by dialogue scenes, how we lost doug (one of our very own L”M”N audience members) to sheer boredom coupled with the shock of scuba diving midgets in toilet bowels, and the complete fear I felt when I heard and saw two main characters being welded together. I can’t help but think of the pure disappointment cast upon us all when the main character “Jose” goes walking lonely and broke in the streets while somewhat minor characters whiz by in their green-screened cars and pickle more minor characters hands in jars instead of buying one rotten orange from a poor immigrant. I think, what could be worse than watching this entire movie and the writers spit on you by encouraging the audience to through all of your earnings (except for the weight of a wet perverse dwarf in cash) into the river just so you can spend the rest of your life with some skanky teenage girlfriend with two cigarettes in her mouth and some little girl who thinks your her father; then, i just look up and see Dane Cook humping a couch only to be stopped by two monks swimming in pudding.

Hard Cash is one the best “worst-“movies”” we’ve watched to date. That is officially why we hand out a “Hard Cash” every season to that one “movie” that says “it’s ok be lousy.”

Go ahead and scoff. But how else is a giant teddy bear supposed to make a living after starring in The Avengers?

Recurring motifs within cinema are not uncommon. I couldn’t give a proper example (organized crime in the Godfather). But I love to see my own typed words on monitor. I do know what a recurring motif IS, though. And one of those pesky varmints appears in the Cannon Canon. And that recurring motif is…the elderly reminiscing about bygone glory days. Of war, discriminant sexual relationships, and handmade bullets. Cousins Menahem Golan and Yoram Globus took us once again to the edge of the geriatric psyche with Death Wish 3. Franklin Delano Roosevelt once said, “We must be the great arsenal of Democracy.” An arsenal that may contain no less than one submachine gun for an angry store taxi counter store owner, whose shop has just erupted in flame, sending projectile rubble in approximately 25 different directions. The number 25 is also important because it is the actual number of actors used in this film and the estimated value of the crystal attic bottle filled with bourbon.

Organizing principle may be needed for this synopsis, but this movie in it’s pure essence has evaded synopsis. We’re tired, we’re salty-mouthed, the old man postures stay rigid. I’m intrigued by the character of Telly, who was, I believe Jamaican-Me-Crazy guy with Akira Toriyama anatomy and a halvesy? How do you discern a criminal? Does he land flat-footed and run backwards, head-spindling like Michael J. Fox? Criminal. Does he snort Morton’s rock salt for a blinding and violent high? Criminal. Is Alex Winter the Brat Packs gall-bladder? Yes. St. Elmo’s fire next week.

Charles Bronson, the fighter of crime, with ‘Nam pitfall tactics a few notches higher than Ke Hu Quan from The Goonies.
Charles begins his rampage after being accosted in city prison by a young thug whose identity is found in an unfortunate encounter with red magic-marker and a Bic. I believe his name was actually Slick Shoes, or Director’s Son. Perhaps he is a fading sunset, or your dad’s old shoe polish. In a different world, I would have loved this man like a brother.

Wanted Horses? The legitimate question is: when were horses last exploited in such a horrific fashion? The Godfather.

Let me pare it down a bit.
Bad cinema evades the classification of parody. Death Wish 3 winks at the action-movie audience of the 80’s, skeptically. The movie in the end is the product of skepticism and ignorance, of not respecting the audience. It is not wrong to make an action movie for it’s own sake, but Death Wish relies not even on a tried formula: It is effective only in it’s disregard for all things good. The movie is as awkward and foolish as a child trying to mask the smell of pot when his parents come home early unannounced. The untrained viewer may believe the movie a product of a drug-addled creative forum, but I propose that the movie is the result of the frantic, uncouth lusts of mankind for immediate money, and the urgency of finishing a large endeavor that should never have been pursued in the beginning.

I give Death Wish 3 FIVE playdoh-fun-factories.